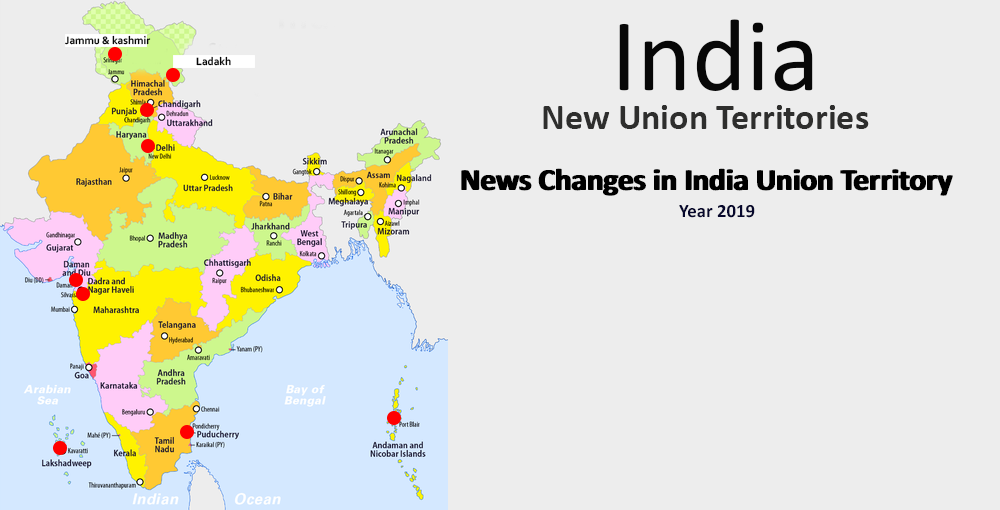 Jammu & Kashmir, Ladakh was new union territories with the 7 other union territories like NCT of Delhi, Chandigarh, Dadra and Nagar Haveli, Daman and Diu, Lakshadweep, Puducherry(old name as Pondicherry) and Andaman and the Nicobar Islands.

1. Ladakh – A Ladakh become new union territories after the government dissolved Article 370 and Article 35A. Ladakh is a region administrated by India, located in the northern part of the Indian SubContinent and a part of the larger region of Kashmir, which has been disputed between India, Pakistan, and China since 1947.

Ladakh was full of a superabundance of attractions to visit and fabulous landscapes full of mountains enfold this magical Buddhist ex-kingdom. Ladakh is truly heaven to earth. Ladakh is a magnificent and an unexplored wonderland of the Himalayas.

It is one place that is considered as a heaven by everyone who is on a lookout to satiate their indomitable love for adventure. Besides trekking in Ladakh, you can indulge in a series of adventure sports such as biking, water rafting, safaris, etc. Also known as the ‘Land of Passes, Ladakh forms an alluring part of the state of Jammu and Kashmir in India.

2. Jammu & Kashmir – A Jammu and Kashmir become second union territories after the removed of Article 370 and Article 35A. As union territories road map to the growth of Kashmiris is open and now companies from around the world able to invest in J&K. Jammu Kashmir is the Share Indian Subcontinent and disputed Pakistan occupied Kashmir illegally.

The State of Jammu and Kashmir was a special status by Article 370 and Article 35A. Theirs have a separate flag, own constitution, and administrative autonomy. Before the revocation article where no one can buy land outside Jammu and Kashmir and many other restrictions on the people. Now all restrictions end. One Constitution, One Nation and One Flag in entire India.

3. National Capital Territory of Delhi– NCT of Delhi a union territory that consists of the national capital surrounded by Haryana, Faridabad, Ghaziabad, Noida, and Gurugram. The capital of India is administered by its own legislature, high court, and council of ministers.

Delhi is a very important city in every purpose here like from political views, business, and studying in Delhi. Full administrated by the Central Government and also with local government.

Delhi has a population of more than 2 crores attracts yearly lakhs of people for business and travel purposes. Delhi is a place of historical monuments, crowded shopping malls, and university campuses.

4. Chandigarh – A Chandigarh is a union territory that is the capital of Punjab as well as Haryana. Chandigarh neighboring borders with Delhi and Haryana. With a Similar status like Delhi, Chandigarh is governed directly by the central government.

Chandigarh is a well-planned town with modern architecture, Declared a Union territories in 1966. The name of the city is derived from the Chandi Temple located in the vicinity. The main business of Chandigarh for cultivation and agriculture whatever there is being gradually acquired for the expansion of the city. The main crop of food grain is wheat, rice, cotton, sugarcane, pearl millet, maize m barley, and fruits. Among the fodder crops are bajra and jowar.

5. Daman and Diu – Daman, and Diu comprise two entities collectively administered by the central government and considered as a single entity. The territories were Portuguese colonies, incorporated into India by military conquest in 1961. With an area of 112 sq km, it is the smallest federal division on the Indian mainland. Daman and Diu were part of the UT of Goa, Daman, and Diu until 1987 when Goa was granted statehood.

A Daman and Diu considered as a travel destination has cool beaches, greenery, scenic natural beauty, and most of all, its easy availability of cheap liquor makes Daman a popular destination among youths and even as a getaway for those in Gujrat.

7. Puducherry – Puducherry is formerly known as Pondicherry referred to as just pondy, is one of the nine union territories of India. A former french establishment Puducherry, Karaikal, Mahe, and Yanam, which lay scattered in South India comprise the 479 sq km area of the UT of Puducherry. It is bounded by Tamilnadu and Andhra Pradesh, Kerala merged with the Indian Union in 1954 after being French Rules for 138 years. The territories of French India were completely transferred to the Republic of India on 1 November 1954.

9. The Andaman and Nicobar Islands – A First union territories after the Independence group of 572 islands located at the juncture of the Bay of Bengal and the Andaman Sea, which lies to the east of Bay of Bengal. Lagoons of crystal clean water and scenic beaches topped with a little bit of history perfect choice for enjoyable purposes. The Andaman and Nicobar island’s main business is growing coconut, areca nuts, pulses, oils seeds, fisheries and also promote small scale industries. One of the best places for traveling and fishing.